Formation of Tribal Advisory Committee creates first of its kind in U.S. 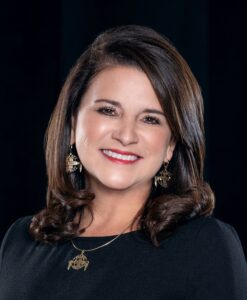 Atmore, AL – As part of a focused effort to strengthen relationships between the federal government and Tribal Nations, U.S. Department of Interior Secretary Deb Haaland has appointed Poarch Band of Creek Indians Stephanie Bryan to a select committee of Tribal Leaders who will serve as direct advisors to the Department.

“It is an incredible honor to be asked to serve Indian Country, and I am grateful for the opportunity to work directly with Secretary Haaland and her dedicated staff at the Department of Interior on the issues that matter most to Poarch and to our fellow tribes in the Eastern region,” said Chairwoman Bryan.  She continued, “In forming this committee, Sec. Haaland has significantly changed how voices from Indian Country are recognized in policy discussions, and I believe this is a chance for us to truly be at the table and have an impact on decisions made at the federal level affecting tribal communities.

The formation of STAC was announced in 2021 as part of the White House Tribal Nations Summit. Designed to further strengthen relations between the Department of Interior and Indian Country, it ensures that its Tribal Leader Members have direct, consistent communication channels with the Department of Interior executive leadership and staff that include frank dialogue representing varying viewpoints on issues impacting Tribal Nations. The Committee will also serve as a channel for timely communication about and access to programs and funding that will help positively impact Native communities.

You can view the full list of STAC Members and the original announcement from the Department of Interior at: https://www.doi.gov/pressreleases/interior-department-announces-formation-first-tribal-advisory-committee-strengthen.

The Poarch Band of Creek Indians is the only federally recognized tribe in Alabama.  From hospitality to aerospace, it continues to operate in a variety of industries across the World.  Read more about our Tribe here.